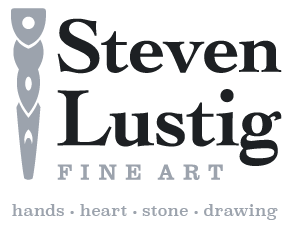 Man's Depiction of His Hand and Himself

Since man first pulled a branch covered in charcoal out of the fire and figured out that he could draw an image of himself on a cave wall, he has been obsessed with his own likeness. With no mirrors, no cameras and no video, he had no choice but to look, look at himself or at the others in his collective. Why was his hand the first thing to go up on the wall along with his food and himself? The easy answer is that he could look at his hand, he could place it on the wall, touching the stone and trace around it. But the deeper answer is that, it is with his hand that he could do all these other things. It is with his hand, and his opposable thumb that he could grab a stick and make a tool. A tool to hunt, to kill, or to draw. The effect of using his hand helped develop his mind. And using his mind, his eyes and his hands he could draw himself and learn more about who he was, why was he here, and what he could do. All this become a circular development process that helped create modern man, the modern mind and the incredible hand eye coordination that we all posses and use to create our art.